It may seem odd to include a picture of a Dalhousie University Tigers promo ball in a UNB Red Bombers newsletter, but there is a great story about the Tigers’ entry into the Atlantic Football League (AFL) in 2010 that speaks to the long history between the UNB Red Bombers (est. 1949) and the Dal Tigers football team (est. 1947). Dal had also lost its football program (1976). 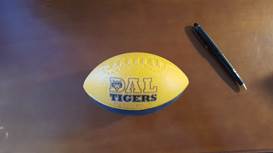 Story goes that in the early Spring of 2010, the AFL AGM was being held in one corner of a very large meeting room in a hotel in Moncton. The AFL had just completed their 1st season, and one of the biggest Maritime football stories of the previous Fall, carried by every ‘daily’ in the region, had been the return of the UNB Red Bombers to the football field. Suddenly the door at the far corner of the room burst open and 2 of these balls spiraled perfectly toward the Chairperson’s table with a loud “WE WANT IN”. The Chair recognized the delegation from Dalhousie University.

Prior to last season the Red Bombers’ GM, Mike McSorley, contacted the Tigers GM, and they agreed it was time to revive an old rivalry. We proposed to create an annual challenge exclusively between the football teams of the two universities. The UNB Alumni Cup between the UNB Red Bombers and the Dal Tigers football teams would be a 2 game, total point, home and home series. We approached “our guy” on the UNB Associated Alumni Board Jim Simons, who agreed to take the idea to UNB’s Alumni, and to contact Dal’s Alumni. With the help of Mark Dee on the Red Bombers committee who found a suitable trophy (below), it was set. 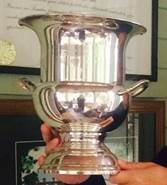 The first game of last year’s inaugural UNB Alumni Cup home-and-home coincided with UNB’s Homecoming Game against the Dal Tigers (which you may remember we won). Our Chairperson Brian Gilliland and our GM Mike McSorley traveled to Halifax for the second game which coincided with Dal’s Homecoming Game and were treated to the warmest of hospitality by the Tigers and Dal Alumni (but which you may remember we lost). With a close total point score Dal won the 1st UNB Alumni Cup. …. Now that stung… game on !!! We’ll reciprocate their warm hospitality… but… game on !!!!

This year the schedule once again has us trading Homecoming Games. The first game of the 2nd Annual UNB Alumni Cup will be at our Homecoming on Oct.1. Many of you have already let us know that you are returning for the Red Bombers reunion that day. The second game will be at Dal’s Homecoming Oct 15 at 6:00. (we want to see a lot of local Red and Black at that game at Dal).