Charlottetown, PE -- The Holland College Hurricanes were unable to beat the Dalhousie Tigers on the road, falling 29-11 in the battle for the Moosehead Cup in the Atlantic Football League championship game.

The ‘Canes had trouble with their running and passing game, and struggled to hold on the football, resulting in 7 turnovers and a missed chance at a fourth straight championship.

Despite the loss, head coach Ross Young was happy with his team performance.

“I’m proud of these guys, and the way they came back in the last two weeks.” Said Young

The Hurricanes struggled to bounce back from a rough start to the first quarter and did not lead at any point in the game.

The ‘Canes struggled on the first two attempts of their opening possession and dropped back to punt the ball away on third down. The snap of the ball sailed over punter Liam Carter’s head and rolled into the end zone, where it was recovered by the Dalhousie defence for a touchdown.

The Hurricanes offence struggled early on, amassing negative yardage of offence in the first quarter of play.

With the Tigers heading into the second quarter up 7-0, momentum was on their side, but within the opening minute Holland College got on the board.

After failing to move the chains on second down, the Hurricanes set up to punt. Carter launched a high-arching kick into the other team’s end zone that the Tigers could not return, resulting in a single point for the Hurricanes.

With control of the game up for grabs, the Tigers capitalized on a tricky hop and recovered a return team fumble.

After a failed offensive possession, Dalhousie punter Brock Saumure sent the ball deep into Hurricane territory and as punt-returner Andre Goulbourne set himself up to receive the kick, the ball took a challenging bounce and struck the Holland College player. The Tigers jumped all over the loose ball, gaining great field position for their team.

Two plays after the Dalhousie fumble recovery, quarterback Nick Hunsley threw a 37-yard touchdown pass to Guillaume Bernier for what looked to be the first major score of the game, but the play was called back due to a Tigers’ face mask penalty.

The Tigers were unable to reach the end zone on that possession, going on to miss a 25-yard field goal to cap off the drive. On the ensuing kick-off, a botched return from another Holland College returner resulted in a single for the Tigers, increasing their lead to seven points.

Minutes later, with the Tigers offence in the opposing red zone again, Hunsley threw a 15-yard pass over the shoulder of Bernier for a touchdown. Yet again, a flag was thrown on the play and score was called back due to offensive pass interference.

The Tigers were able to salvage what was left of the drive and score a 27-yard field goal to give themselves a comfortable 10-point lead.

Just as the Holland College offence started rolling, the Hurricanes fumbled the ball and Dalhousie took possession, kicking in another field goal as the buzzer sounded to end the half.

Behind 14-1, the Holland College rookies stepped up when it was needed most.

In the opening minutes of the third quarter, after a Hurricanes fumble, first year player MacKenzie Campbell intercepted a deep throw from the Dalhousie’s Hunsley and ran the ball back 76 yards for a Holland College defensive touchdown.

The Tigers would answer back with touchdown of their own minutes later, effectively forcing 13 points between the teams once again.

Holland College opened the final quarter of play with an interception by Torriano Curtis. That takeaway turned into three points for the team after kicker Liam Carter struck a 41-yard field goal to put the Hurricanes back in the game.

Even with momentum on their side, that is as close as Holland College would get.

A fourth quarter Dalhousie interception turned into a defensive TD of their own, and after the resulting kick-off resulted in a single, the game was all but over.

The Tigers would go on to win their first football championship since 1954 by a score of 29-11. 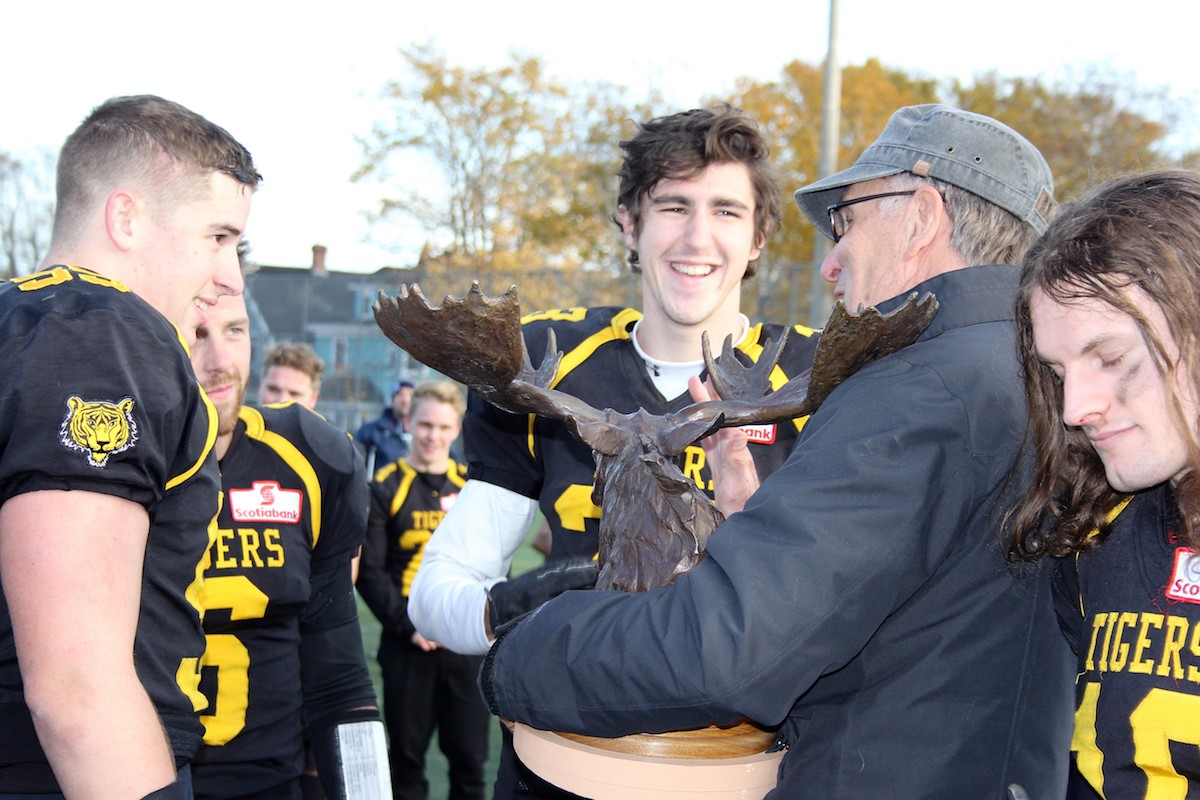 Young knows his team played hard, but realized that turnovers halted any chance of a comeback.

“A championship game is full of surprises.” Said Young “We had some troubles and turnovers will kill you.”

Hurricanes players were emotional after the loss, but coach Young feels that a trip to the championship could only be a good thing for such a young team.

“They stayed with it regardless of the score, and they believed they could do it,” said Young. “This was a great experience, and now we’re looking forward to guys like Thomas MacKenzie and other veterans taking leadership roles.”

The Hurricanes finish the season with a 3-5 record and extended their streak to four consecutive appearances in the AFL championship game.

After a rough season, the Hurricanes are looking to build on the experience next season.