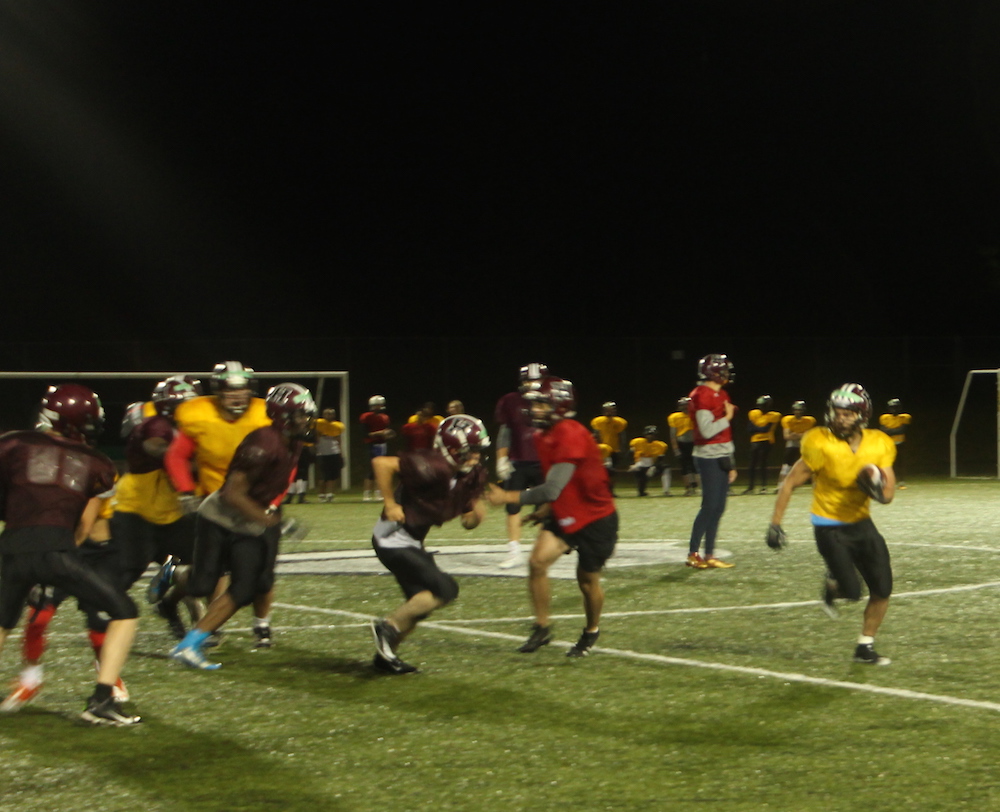 Thursday, September 13, 2018. Charlottetown, PE – Excitement is building for the Holland Hurricanes and their fans as the team prepares for their first Atlantic Football League regular season game, taking place on Saturday at 1 p.m. in Saint John against the Sea Wolves.

O-line coach Angel Brionez has only one thing on his mind, “Chasing that ring, no matter the cost.” The first-year coach, who was born in Mexico and grew up in Texas, said that the first game will be an opportunity to make a statement.

“We want to put the league on notice,” said Brionez, who has experience coaching high school and college football.

It’s hard to find more experienced players then Alex Rose and Mitch Logan. Both entering their fourth year with the team, they consider themselves guys who lead by example.

“I lead by just being that spark and getting the big hit that lights the fire,” said Rose.

“I’m more of quiet leader and like to show them on the field and lead by example,” said Logan.

For some rookies, who will play college football for the first time ever this Saturday in the game against UNB Saint John, the challenge will be to keep calm. Rose said the more experienced players will be there to support them.

“It starts at the walkthrough. Keeping them focused for the game,” he said.

When it comes to Saturday’s opponent, Logan isn’t worried.

Second-year starter QB Brady Crowe, from Belleville, Ontario, has the same confidence when it comes to the season. “We should win this, if we stick to our game plan and execute,“ he said, “Good things are going to happen,”.

Head Coach Ross Young appreciates the sentiment, but he isn’t counting Saturday’s game as a win just yet.

“The Sea Wolves have a new coaching staff and had a great recruiting class. We are going to see some parity in the league this year,” said Young. “We are in for a hard-nosed, well executed game from the Sea Wolves.”

The Hurricanes coaching staff includes a group of former team members this year. Owen Williams has been working with the linemen and brings his years of experience as a Hurricane and as an Axeman at Acadia to the table. Cole Brydges has made the transition from player to coach and has the defensive secondary and special teams on fire. Jeff Hillier, four-time player on the Hurricanes’ championship-winning teams, brings his experience to the receiver and running back corps; and Zach Davidson brings intensity to the program.

“These guys are supportive of each other through the good and the bad, and that is the base for success,” Coach Young said.

Young wants the Hurricanes to focus on their game plan, execute each week, and concentrate on one game at a time.

A link to webcasts of all the games can be found on the league website, atlanticfootball.co.