“The emotional aspect is what makes the game worthwhile. In the tragic 33-32 loss to Acadia in 1979, big 6'3" 230 lb. George West was seen after the game behind the LBR with tears streaming down his face. The game itself had UNB up 32-3 at the start of the 4th quarter. Acadia rallied to win and went on to become Canadian champs. It was a tragedy right out of Shakespearean Drama. It is war that has sorrowly been missed the last two years at College Field. They say football will never come back to UNB. They also said Big Boys Don’t Cry.” 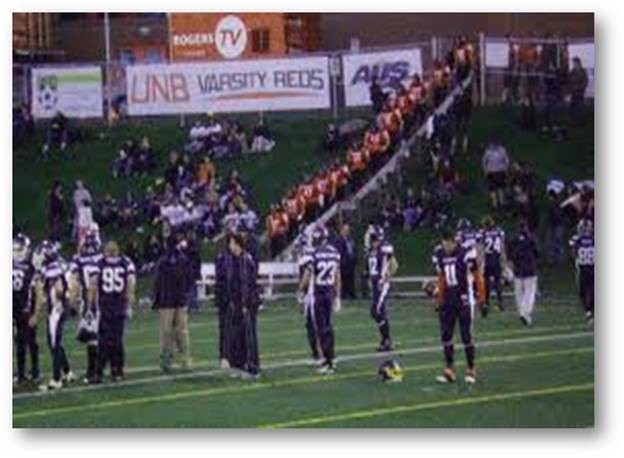 So much more than we could have realized was being rekindled on campus that night.

It was a particularly warm summer-like day for late September with kick-off scheduled for 7:00pm. (As the sun went down it cooled quickly.) When Larry Wisniewski and Cyril Lutze-Wallace announced locally in late August that the Atlantic Football League had been formed, Red Bombers Coaches Mike Dollimore and Mike DeMello wondered if the players would come. All they and Larry (who had taken on the job of Red Bombers GM) could do was spread the word. … 76 players showed up for Training Camp, including former CIS players who were going to UNB. We had the players …now for the fans.

We remembered the crowds the Bombers used to draw. There was another wrinkle; UNB’s V-Reds Hockey (National Champions), were playing an exhibition game the same night in the Aitken Centre right above the field. They would certainly have their 2600 seats filled in the rink, and they did.

No social media to speak of yet so, posters, ads in the Brunswickan, newspaper, and radio, and arrangements with 4 downtown pubs to host warm-ups before the game with City bus runs going from the pubs to the field and back, before and after the game – the word was getting out.

Mike Dollimore had done everything he could during camp to instill in these players what it meant to be a UNB Red Bomber. During an earlier campaign to revive the team, Mike had produced a CD that was professionally narrated reaching right back to the 1949 inception of the team. Afterall, these players would be the first Red Bombers to take the field in 29 years, and the stories of past glories were unknown to these guys.

So picture for a moment that you are one of those players in 2009 in the dressing room putting on the Red N’ Black for the first time (some of you reading this were indeed one of those players or coaches). At the door is an old Red Bombers helmet from the 1980 season that each player pats as they walk out of the dressing room. A short walk, and as you approach the crest of the hill before going down the long stairs to the field, you wonder why the PA is blaring out the US Navy’s “Anchors Aweigh” music (nice tune I guess – oh well). Suddenly you are at the top of the stairs with your first glimpse of the stands on the other side of the field,… and nearly 3000 fans erupt. This “Red Bombers-thing” starts to sink in. As one of those players Brian Gilliland said, “It’s a moment I will never forget.” 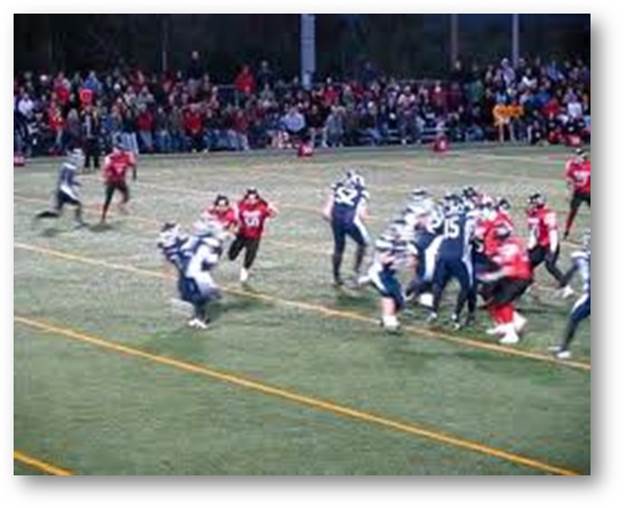 Pat Gillin, one of the Founders of the revived team had passed away in July, but family members were there to share the moment. Old Red Bombers jackets (fitting snugly) could be seen dotted throughout the stands. As you scanned the Red Bombers bench, there he was – Tony Proudfoot standing with the players with a grin from ear to ear. Eddy Campbell had just begun as UNB’s new President and performed the first Ceremonial Kick-off at a Homecoming.

Half way through the 2nd quarter with a break in the action you could hear the fans roaring and cheering – first from the west end of the stands and then building like a wave louder and louder across to the east. Then you saw him… the Streaker … running full-out endzone to endzone, quickly up the hill and over the fence to the waiting car. … Perfect ! … College football !! The crowd went wild !!! This “Red Bombers-thing” was starting to sink in for everyone. The Bombers were home again. Jim Simons told us that the Red Bombers game was the imputes behind Homecoming being moved to late September. The only problem … we lost the game to the UNBSJ Seawolves 16-14 with a 30 yard field goal in the dying seconds. It didn’t seem to matter. It was magic. All of it. As Richard said, “The emotional aspect is what makes the game worthwhile.” 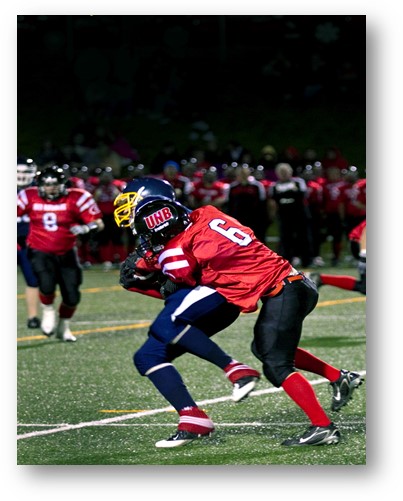 2019 is the 10th Anniversary of the AFL and the return of the Red Bombers to the UNB Campus. We’re planning the largest Red Bombers reunion ever at Homecoming Sept. 28th. We’ll be talking a lot about that and Red Bomber moments in the months to come.