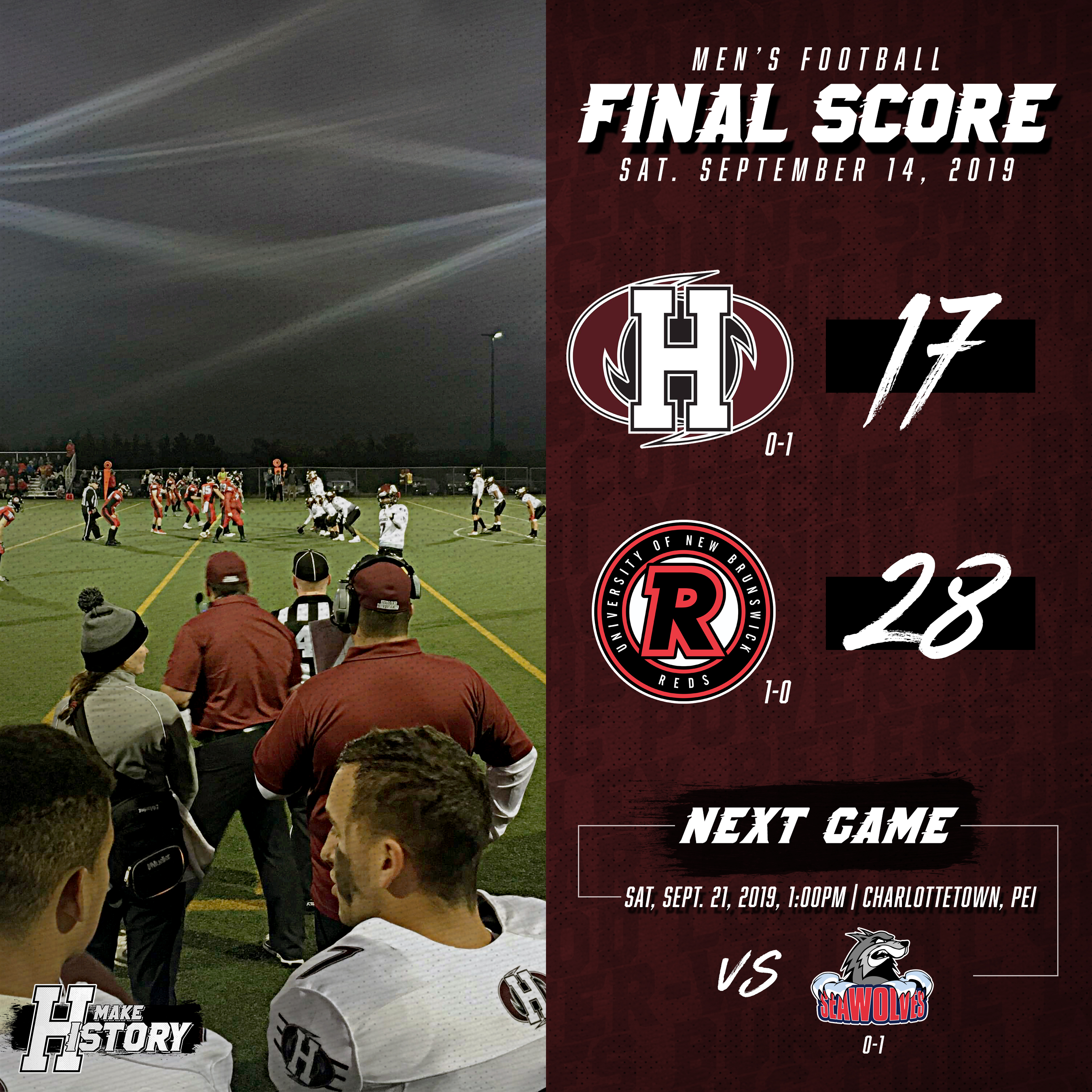 The Holland Hurricanes men’s football team dropped a close game to the University of New Brunswick (UNB) Red Bombers on Saturday in Fredericton, NB; it was their first game of the 2019 Atlantic Football League (AFL) regular season.

A fourth-quarter touchdown with 10:16 remaining gave the Red Bombers an eleven-point lead in the game, securing the 28-17 victory in front of their home fans.

Head coach, Steve Letner, was pleased with the effort from his team while recognizing areas they can improve after the weekend.

“I felt the team played hard all game. The mistakes we made during the game are fixable and we will rebound this week in practice before hosting UNBSJ on Saturday.”

The Red Bombers opened the scoring midway through the first quarter after a missed field-goal attempt gave them the 1-0 lead; the ‘Canes answered with a 30-yard field-goal early in the second by Matthew-Uriah Kaye-Mitchell, giving them the 3-1 lead.

UNB bounced back with two touchdowns at 11:31 and 14:00 of the second quarter to extend their lead to 15-3. The Hurricanes would claw back with just 21 seconds remaining in the half when Kymani Simpson made a leaping, highlight reel catch from quarterback Michael Petroschke in the back corner of the end zone to cut the UNB lead to just five points entering the half.

With 3:30 remaining in the third quarter, the Red Bombers would extend their lead with a touchdown; the ‘Canes responded when receiver, Tyler Majaury, caught a Petroschke touchdown pass as time expired to pull within five points once again.

This was as close as the Hurricanes would come after UNB scored 4:44 into the final quarter.

Jack Malo returned a punt for 63-yards in the game while Tyler Hobbs and Justice Grant each recorded one sack and Petroschke completed 11 of his 22 pass attempts.

The Hurricanes now turn their attention towards the University of New Brunswick-Saint John (UNBSJ) Seawolves; they face each other on Saturday at 1pm at Alumni Canada Games Place in Charlottetown. The Seawolves dropped their home opener on Saturday to the Dalhousie Tigers, 31-14.

Connect with the football Hurricanes by visiting www.twitter.com/canesmfootball.