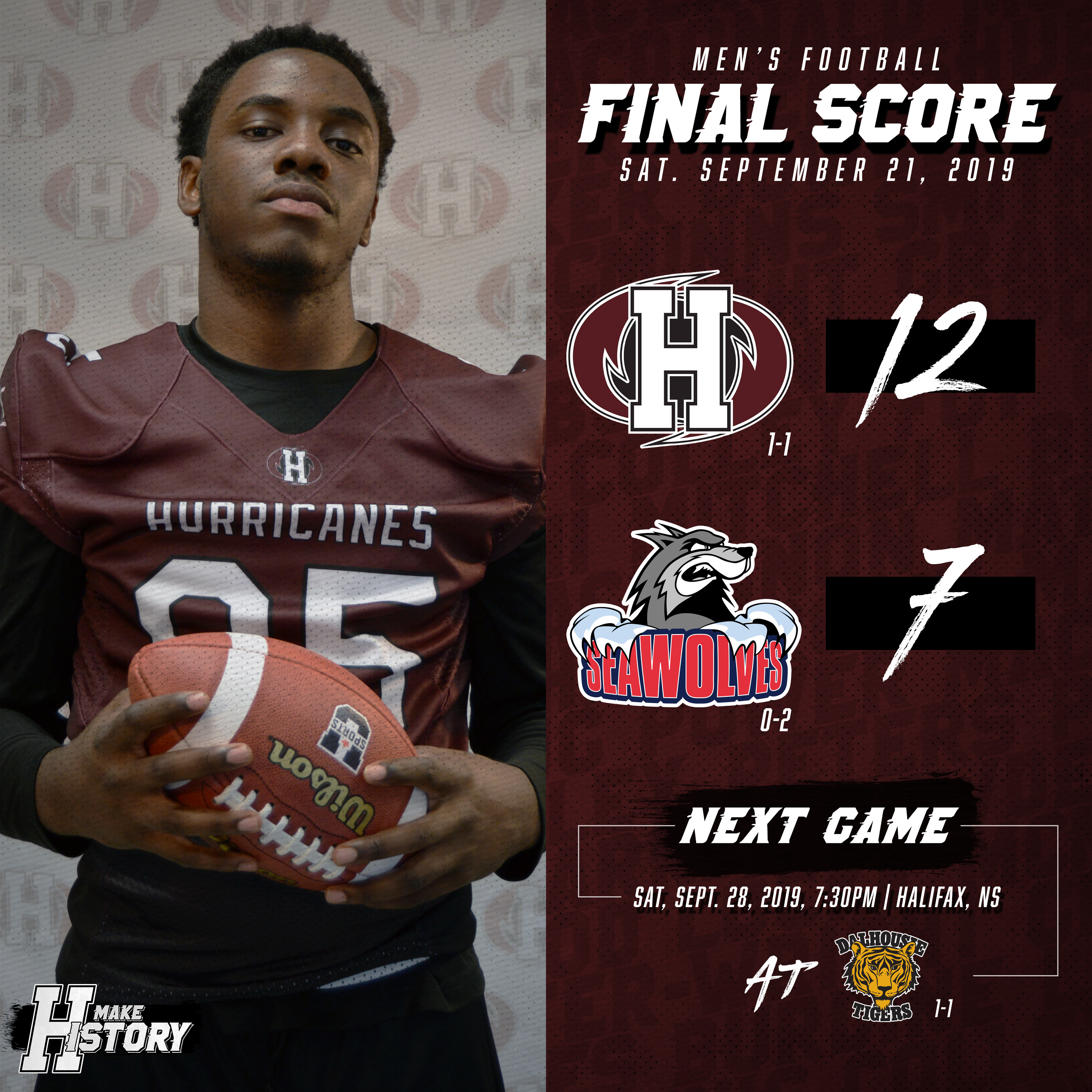 The Holland Hurricanes hosted their 2019 home opener on Saturday versus the University of New Brunswick-Saint John (UNBSJ) Seawolves at the Alumni Canada Games Place in Charlottetown, PEI. The ‘Canes were victorious with a touchdown in the final seconds to earn the 12-7 victory.

In front of their home fans, the Hurricanes entered week two of the Atlantic Football League (AFL) regular season at 0-1 after dropping their season opener to the University of New Brunswick (UNB) Red Bombers in Fredericton on September 14 by a score of 28-17. They looked to earn their first win of the season over the Seawolves, who also entered Saturday’s game at 0-1.

The Seawolves jumped on the board first, completing a pass from just inside their own half for a touchdown, giving themselves the 7-0 lead with 4:36 remaining in the first quarter. The ‘Canes bounced back as the first quarter ended when Tyler Majaury kicked a 15-yard field goal to cut the UNBSJ lead to 7-3. The ‘Canes gained another point after a missed field-goal late in the half, making the game 7-4 at halftime in favor of the Seawolves.

The defensive battle continued in the second half with no points scored in the third quarter. The Hurricanes gained another single in the fourth quarter after another missed field goal, bringing the score to 7-5 for UNBSJ.

In the final minutes of the fourth quarter, the Hurricanes regained possession of the ball near midfield and worked their way inside the Seawolves ten-yard-line.

After multiple attempts, quarterback, Mike Petroschke, finally broke the plane for a diving touchdown with just two seconds remaining on the clock. After the extra-point was converted the Hurricanes held a 12-7 lead; their first lead of the game, which is how the game would end.

Head coach, Steve Letner, was happy with how the team stepped up when it needed to.

“It came down to a game of inches. But, as good teams do, you find a way to win and we did that. I’m very proud of the way we kept charging forward on Saturday. Defense played excellent and the offence came through when it mattered.”

Petroschke completed nine of 22 pass attempts on Saturday for 153 yards while Rodrigo Montes de Oca led the Hurricanes on the ground, rushing for 140 yards on 27 carries. Others who contributed to the running game for the ‘Canes was Petroschke (seven carries for 34 yards), Jared MacDonald (one carry for 25 yards) and Thomas Cassidy (two carries for 14 yards).

Javier Fernandez and Tyler Hobbs each recorded one sack for the Hurricanes on defence.

With the victory the Hurricanes improve to 1-1 on the season while the UNBSJ Seawolves drop to 0-2.

The other AFL game on Saturday saw the UNB Red Bombers outlast the Dalhousie Tigers by a score of 46-45 in Fredericton.

The ‘Canes will now turn their attention to this Saturday’s road game in Halifax, Nova Scotia, when they take on the Tigers (1-1) at 7:30pm at Wickwire Field.

The next home game for the Hurricanes takes place on Saturday, October 5 when they host the UNB Red Bombers at Alumni Canada Games Place in Charlottetown, PEI at 1pm.