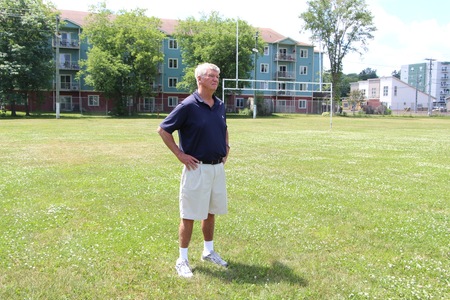 In fact, Pinckard can now lay claim to the longest punt recorded at any level of North American football.

“It means something,” said Pinckard. “It recognizes the kick, but I don’t think for a minute that I was that good of a kicker who could do that consistently, or even kick 60 yards.”

On September 24, 1966, Pinckard, a member of the University of New Brunswick Red Bombers, struck a punt that, until today, was recorded as 89 yards.

It came in a game played at UNB’s College Field, against Saint Dunstan’s University, which would later become the University of Prince Edward Island.

For years, Pinckard argued that the punt actually travelled further than the recorded 89 yards.

He says the ball, kicked from UNB’s 21-yard line bounced over the heads of the Saint Dunstan’s receivers, across the goal line and out the back of the end zone.

And, for years, teammates urged Pinckard to push the issue.

“It went right through the end zone,” he said. “And it was my teammates who told me that they now record those things as going to wherever the dead ball is, the dead ball spot.”

After a comprehensive review of documentation including the College Field blue prints, which indicate the end zones were 25-yards deep, and the provision of several sworn affidavits from Red Bombers teammates and the game’s official timer, U SPORTS now recognizes that Pinckard’s punt travelled 114 yards, 13 yards longer than the previous record.

Aaron Gazendam, playing for the University of Toronto Varsity Blues, booted a punt 101 yards, in a game against Western, on September 20, 2014.

“The snap was a bit high. I grabbed it with one hand. I don’t even remember getting the second hand on it, I was rushed to get it away,” said Pinckard, remembering the kick. “It was a good punt in its own right, but once it got over the two receivers’ heads it landed on its end and it got one of those really rapid bounces and away the thing went, aided by the wind, and it went right down through the end zone and against the fence.”

The statistician of the former Maritime Intercollegiate Athletic Association confirmed the play as recorded that day.

The September 29th, 1966 edition of ‘The Brunswickan,’ UNB’s campus newspaper, reported the 89 yard punt, calling it a key play in UNB’s 9-7 victory.

Pinckard’s record kick is longer than any punt recorded in university or professional football in Canada or the United States.

The longest punt in NCAA history is a boot of 99 yards, struck by Nevada’s Pat Brady, in October of 1950.

The longest punt in NFL history travelled 98 yards, off the foot of Steve O’Neal, of the New York Jets, in September of 1969.

“I think it’s pretty neat,” said Pinckard, of the new record. “There were so many elements to that kick that you couldn’t repeat. The weather conditions, the fact it wasn’t wet. Had it been, it wouldn’t have got the bounces it got. It got over their heads, had it not, it would’ve been a 60 yard kick, or something like that.”

He was the team’s long snapper.

“I was not the kicker of the team, but I could kick,” he said. “I would always come out to practice and guys would shag punts for me, but I wasn’t the kicker because I was the long ball snapper, so I couldn’t be in both positions at the same time, but the kicker got hurt, so that day, I was the punter.”

Affidavits confirming the details of Pinckard’s punt have been provided by Mark Jewett, who was the official timer of the game on September 24, 1966, as well as Pinckard’s Red Bombers teammates Daniel Palov, Bruce Tetreault, and Clifford Moore, the team’s captain.

“It’s a curiosity thing, really, like most records are,” said Pinckard, who is quick to acknowledge that all records are there to be broken.

“They all get broken eventually. Somebody will hit a football, sometime, somewhere, in a hurricane, and it’ll go the distance.”