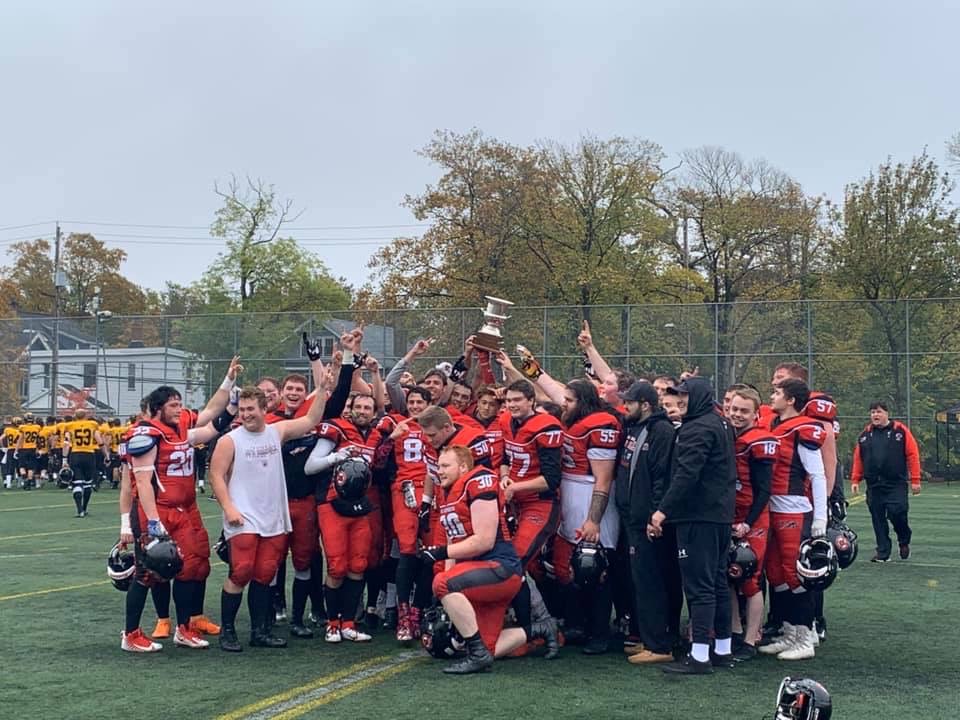 The UNB Red Bombers added another win to their season on Saturday by beating the Dalhousie Tigers 49-42 in Halifax. It was UNB’s second away win of the season after going unbeaten at home for a perfect 5-0 record. In addition to clinching first-place standing atop the AFL heading into the playoffs, the victory also awarded the Bombers the 2019 Alumni Cup, a yearly two-game series played between the Red Bombers and the Dalhousie Tigers.

\ The contest was an almost perfect facsimile of the two teams’ first meeting: a 46-45 UNB victory in week 2 of the season. The Bombers jumped out to a quick 14-0 within the first 11 minutes of the opening quarter before the Tigers answered back with a touchdown pass late in the first. During their first drive of the second quarter, UNB was met with a special teams catastrophe that evened the score: a high snap during an attempted punt sent the football rolling into the UNB endzone, where it was recovered by Dalhousie for a touchdown. With the momentum clearly on their side, the Tigers entered the locker room at halftime with a 28-21 lead.

\ Echoing their performance from the previous week’s game in Charlottetown against the Holland College Hurricanes, the Bombers fought back to retake the lead in the second half. Their first drive of the third quarter resulted in a Dylan Waugh touchdown run to even the score. Waugh would go on to add two more touchdowns on the ground by the end of the game, with a bootleg into the endzone by Quarterback Will Hicks accounting for the other score.

\ The Bombers defense also had a productive day, forcing three interceptions from the Dalhousie offense. The third would prove to be a backbreaking mistake for the Tigers: down 49-42 with just over two minutes left in the game, Dalhousie’s quarterback threw a short route to the middle of the field, where middle linebacker Turner Sturgeon lurked in coverage and undercut the route for the pick. This was Sturgeon’s first interception of the season, who has not only proven to be a versatile defensive weapon in coverage but also calls many of the team’s defensive plays on the field.

\ Next week’s rematch against the UNBSJ Seawolves—a team the Bombers beat 48-20 in week three—is the team’s last obstacle on the way to an expected 6-0 regular season.