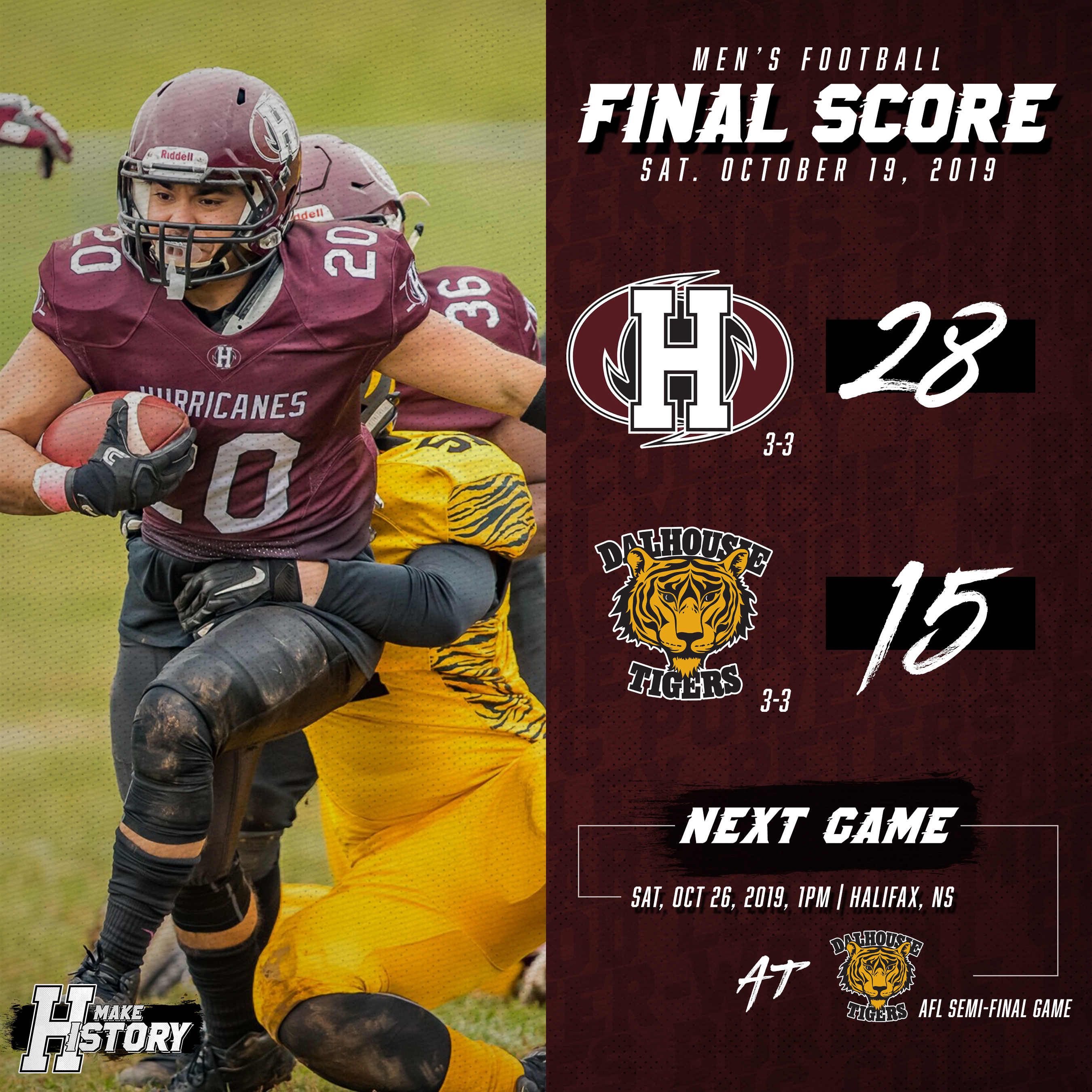 The Holland Hurricanes earned an important statement win on Saturday at home versus the Dalhousie University Tigers in Atlantic Football League (AFL) regular season play. The ‘Canes defeated the Tigers 28-15 in the final regular season game of the season, improving their record to 3-3, pulling even with Dalhousie in the standings.

The Tigers, who won the season series tiebreaker by outscoring the ‘Canes in their two games this season, 43-31, will host the ‘Canes in AFL semi-final action on Saturday, October 26 in Halifax, Nova Scotia at 1pm.

Entering the game, the Hurricanes had their eyes on a 26-point victory which would have had them winning the tiebreaker with the Tigers, giving them home-field advantage for the semi-finals.

The ‘Canes scored early in the game on Saturday when starting quarterback, Treshaun Tran, rushed from two-yards out to put Holland College on the board. The lead was increased to 9-0 after a Matthew-Uriah Kaye Mitchell field goal from the 20-yard line. The quarter ended when Marco Antonio Briones Gutierrez rushed from ten-yards out to score in the final seconds of the first to give the ‘Canes the 16-0 lead.

The second quarter saw the Tigers get on the board with a touchdown and two-point conversion, while the ‘Canes added to their lead with a safety, extending their lead to 18-8 at the half.

Up by ten-points, the ‘Canes increased their lead when Briones Gutierrez scored his second touchdown of the game, rushing from five-yards out to put the Hurricanes ahead 24-8. A ‘Canes safety made it 26-8 heading into the final quarter.

With a home playoff game within reach for the ‘Canes, the Tigers would escape with home-field advantage when they scored a touchdown in the final quarter to cut the ‘Canes lead to 28-15. The Hurricanes only points scored in the fourth was from a rouge.

The matching 3-3 records for the ‘Canes and Tigers set up an intriguing semi-final game on Saturday at Wickwire Field in Halifax, NS.

The two winning teams from this weekend’s semi-final games will face off on Saturday, November 2 in the AFL championship game.